"I believe culture can empower every corner of greater Cleveland to be a greater Cleveland, especially if our priority is to mobilize residents of the most economically distressed neighborhoods."
-Josiah Britt

Free of charge to all attendees, our programs utilize artistic expression to create enriching, interactive, family-friendly experiences with no religious or political agenda. During these community outreaches, attendees have an opportunity to be seen, heard, informed & connected. What that means is that everyone will be celebrated without prejudice (seen), genuinely listened to by others in attendance (heard), taught pertinent information (informed), & introduced to a network of community-minded people & institutions (connected). In order to be as relevant & impactful as possible, every program is tailor-made specifically for each audience, neighborhood or facility we visit. We are a very mobile organization & can easily set-up our equipment in all sorts of indoor & outdoor spaces. We also frequently collaborate with other social, community, & basic-needs organizations to create super outreaches centered around vital initiatives & services. Our programs incorporate some or all of the following activities: 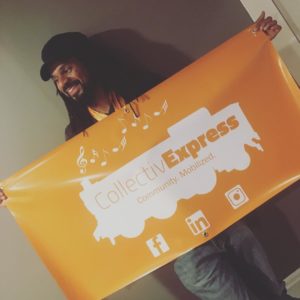 It all started with a question raised by CollectivExpress founder, Josiah Britt. Can culture be used as an effective means to encourage & educate residents of Cleveland in their own community? He spent the early part of 2017 putting together a small team of supporters & building a pilot summer outreach program. The program developed, was inspired by Josiah's musical past as an emcee in the local music scene. Using the power of live instrumentation as a unifying force, Josiah then weaves in & out of the soundscape with poetry, motivational speaking, calls to action, & more. When the first program was launched on June 4th, 2017, it became immediately clear that there were many residents who also had something they'd like to say to their community. From that day forward, CollectivExpress has been a two-way street. Attendees are a major part of the experience & are encouraged to share their thoughts & feelings in front of their peers. The first summer birthed more than a dozen outreaches over a three month period. This included multiple visits to neighborhoods in East Cleveland, Cleveland & Euclid, Ohio. In October, 2017, CollectivExpress Inc. officially became a 501(c)(3) non-profit organization. On June 2nd, 2018, the outreach program returned, picking up where it left off, but with a clearer sense of direction. Relationships with all the original neighborhoods have continued & new relationships have blossomed. It has taken dozens of donors, volunteers, & affiliates to get this program off the ground, but it has been fruitful. So far, hundreds of residents have been engaged in their own community. As this organization continues on its mission, many more residents will be given the microphone & leave with a renewed sense of what community should look & feel like.

Our Commitment to Fight Poverty

We pride ourselves on being able to offer free programming on a regular basis. Although we have amazing volunteers, occasional food donations, & very little advertising, we can still only stretch our funding so far. We are proud to employ professional local musicians & art educators with a heart for our mission. In order to make as large of an impact as possible, all funding raised by us is dedicated to providing additional free programs in economically distressed neighborhoods. Your community event may qualify. If an event doesn't qualify for free programming, we still desire relationship with all neighborhoods & people-groups across greater Cleveland. We will try very hard to work within the budget limitations of any group seeking quality, socially-conscious programming. Conducting a crowdfunding campaign of your own is a great way to cover all costs. We can even assist you in setting one up. Finding a sponsor can be another successful option.

Please feel free to contact us for more information.

Ready to host a purposeful gathering?

Reach Out To Us